To take advantage of the software RAID feature on the PIP platform CPU boards, MPL created the HSRAID-1/2 options. This new solution is a user friendly and easy option to build a hot swap capable RAID system inside the PIP housing - perfect for a RAID1 array.

The HSRAID-1/2 consists of a PCB backplane where the two HDDs are plugged in, internal SATA cables, and the additional mechanics including two HDD drawers. The HDD drawers are mounted above the PIP internal power module on the left side of the housing. The HDDs can be removed externally, without the use of any tools. 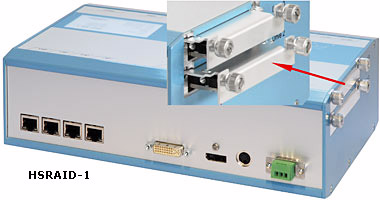 The solution allows hot swap exchange of the two SATA-HDDs under a RAID1 system! Hot swapping means replacing the HDDs without significant interruption to the system and without shutting down the system.


It is also possible to create a RAID0 system. Please be aware that with RAID0, hot swapping of the HDD is not possible. As by definition, as soon as one disk is missing in a RAID0 array, all data will be lost! 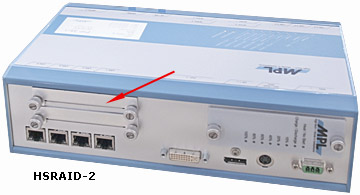 A RAID, an acronym for Redundant Array of Independent Disks, is used to improve reliability and availability of data. Mainly ensuring that important data is not harmed in case of hardware failure, and/or to increase the speed of file input/output. The RAID distributes data across multiple disks, but the array (combination of disks) presents itself as one single logical unit to the operating system.